So the date finally arrived to find out who the ‘winners’ were of Personnel Today’s awards.

Typically, it was raining! not great for those who had clearly preened for hours with hair dryers, curling tongs, non-waterproof make-up finishing the look with totally inappropriate skyscraper shoes!

As a venue, The Great Room at the Grosvenor House Hotel is so luxurious.  Just look at the tables: 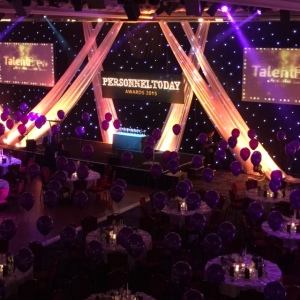 the ice breaker of the evening was the announcement of – ‘burst the balloons – ones with confetti in are winners!’ – we all duly burst said balloons – no confetti in any!  The evening commenced with drinks in the bar before going down to dinner……..

Charlie, Peter & Simon from Wilson James and Portico getting in the mood for celebrating whatever the outcome.

Nigel & Sharon of Harrow Green – who have recruited 13 Growing Talent Associates!  Sharon as always looked amazing complete with her heals despite the pain of sciatica.

After a fantastic dinner, Claudia Winkleman arrived on stay after several selfies to be compare for the night………

Unfortunately neither award we were shortlisted to win were won!  So much great work going on in business.

We relocated to the bar for nightcaps before travel home.

Comparing our entries to those that won in the hard light of day, showed what an achievement all finalists had reached.  It’s a moment to be proud of – and I am…………………